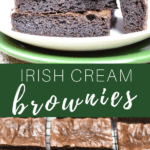 Brownies are a true made-in-America classic. Legend has it that brownies became popular in the 1920s and the first published recipe for brownies was in the 1896 edition of The Boston Cooking-School Cookbook. These “brownies” were based on a cookie recipe that Fanny Farmer adapted for a rectangular pan. But, since the recipe didn’t call for chocolate, they would be “blondies” by today’s standards.

Three years later, a community-sourced Maine cookbook debuted the first recipe for brownies as we know them today. Called “brownie’s food,” the Machias Cookbook recipe included chocolate, flour, milk, and baking soda, as reported by Mental Floss. Since then, home cooks and professional chefs have taken the idea of brownies to the next level and continued to reinvent and perfect the dessert by adding walnuts, chocolate chips, almond flour, and many other ingredients.

Start with your favorite box of fudge brownie mix and add two eggs, one-half cup of oil, plus one-quarter cup Irish cream liqueur. Stir the batter together until no lumps remain. Everything should come together in a matter of minutes!

This simple recipe produces an indulgent dessert that no one will guess started with a box. Fudgey brownies work best for this recipe but feel free to get creative with your favorite boxed mix. I like to use Duncan Hines dark chocolate fudge mix.

Don’t forget to prepare the baking pan with a baking spray that includes butter and flour. The added flour will ensure that the brownies don’t stick to the pan and come out picture-perfect. Smooth the batter with a spatula and give the pan a couple taps on the counter to spread out the batter.

I like to use a special brownie pan that has a removable divider that creates uniformly sized brownies every time. This is totally the perfectionist in me coming out! I found mine at Bed Bath and Beyond but I've seen them on Amazon as well. I love that I don't have to use my knife to cut each piece.

The best brownie recipe is often the easiest to bake. Whether you prefer cake-like or more fudge-like brownies, edges or middle pieces, everyone can agree that chocolate brownies are the perfect canvas for Irish cream liqueur.

Choose your favorite brand or stick to the classic Bailey’s. Bailey’s Irish Cream is a sweet, creamy liqueur made by combining cream and good old fashioned whiskey. Bailey’s is at home in coffee, dessert cocktails, and your soon-to-be favorite brownies.

According to the company website, Bailey’s was invented in Dublin, Ireland in 1974 when David Dand wanted to take the folk remedy of whiskey and milk to new heights. Dand worked with a team of scientists for three years to solve the issue of the liquids separating. The team eventually perfected the modern Bailey’s recipe which includes chocolate, vanilla, and burnt sugar. Bailey’s now offers a variety of flavors from Red Velvet to Pumpkin Spice to Almande Almondmilk (which is made with almond milk instead of dairy).

Irish cream liqueur does all the heavy lifting in this brownies recipe so you can relax and enjoy as your home fills with the smell of fresh baked goods and the promise of chocolate. Best of all, you probably already have everything you need in your pantry.

From bake sales to rainy days, the best brownie recipes are perfect any time of the day or night. Pair them with a tall glass of milk or an Irish Coffee cocktail!

Did You Make our Irish Cream Brownies?!

Did you make this recipe? First, let me say THANK YOU for giving it a try! Please leave us a rating above and leave any feedback in the comments section at the bottom of this post. I always love to hear your thoughts and ideas on what went well — and what didn’t — with a recipe! Did you find a recipe you liked? Be sure to check out some of our other recipes below! 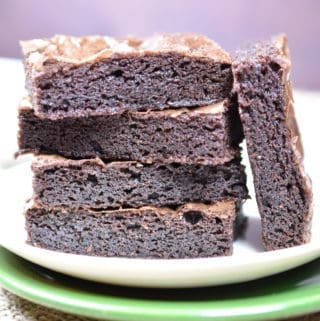 When preparing the pan before baking, use a baking spray that includes butter AND flour. This is a great time saving trick for baking!